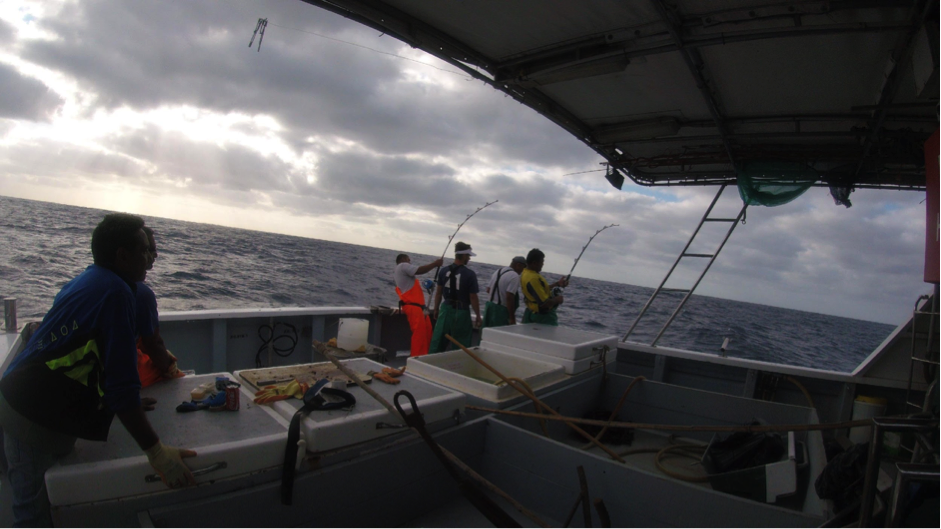 Crew of the FV Extractor fishing at Cardno Seamount

To better understand both local and global tuna stocks, a tuna tagging programme was established on the island in 2015 as part of a Darwin Plus Project.  The Blue Belt Programme has further developed that programme and in 2018, Cefas and SHG were awarded additional funding from International Commission for the Conservation of Atlantic Tunas (ICCAT) to extend the programme.  Working in collaboration with Stanford University, Blue Belt support is focussed on the deployment of pop-up satellite and data storage tags.

The ICCAT project is part of ICCAT’s Atlantic Ocean Tropical Tuna Tagging Project (AOTTP), which aims to tag 120,000 tropical tuna species from across the Atlantic, with a focus on yellowfin (Thunnus albacares), bigeye (Thunnus obesus) and skipjack (Katsuwomis pelamis). So far, the programme has tagged 105,000 fish mostly around the African coast and central Atlantic.

As a contracted member of this programme, St Helena aims to release 5,600 tagged tuna by June 2020. So far 2,400 have been released inshore and at Bonaparte and Cardno seamounts since April 2018.

Once all tuna have been tagged and released. The final phase of the programme will be to analyse the data returned from all over the Atlantic, including St Helena. This information will be used to better understand both local and global tropical tuna stocks, including estimating stock biomass, mortality rates and connectivity between regions. Check out the AOTTP website for an update on releases and recaptures.

Using the returned data from a similar tagging initiative prior to the ICCAT programme (funded by the Darwin Plus Programme) an understanding of the behaviour and migration strategy of yellowfin tuna released close to St Helena island has already been explored. Preliminary results from this work indicate connections to the key fishing areas on St Helena (including the seamounts), but also to the west coast of Africa.

This work would not be possible without the involvement and continued support from the St Helena Fishermen’s Association (SHFA) and the St Helena Fisheries Corporation (SHFC). Thank you to all the fishers involved in the release and recapture of fish from the programme, but also to the SHFC for supporting the return of data from this work. Key findings will be summarised over the next few months, so stay tuned.